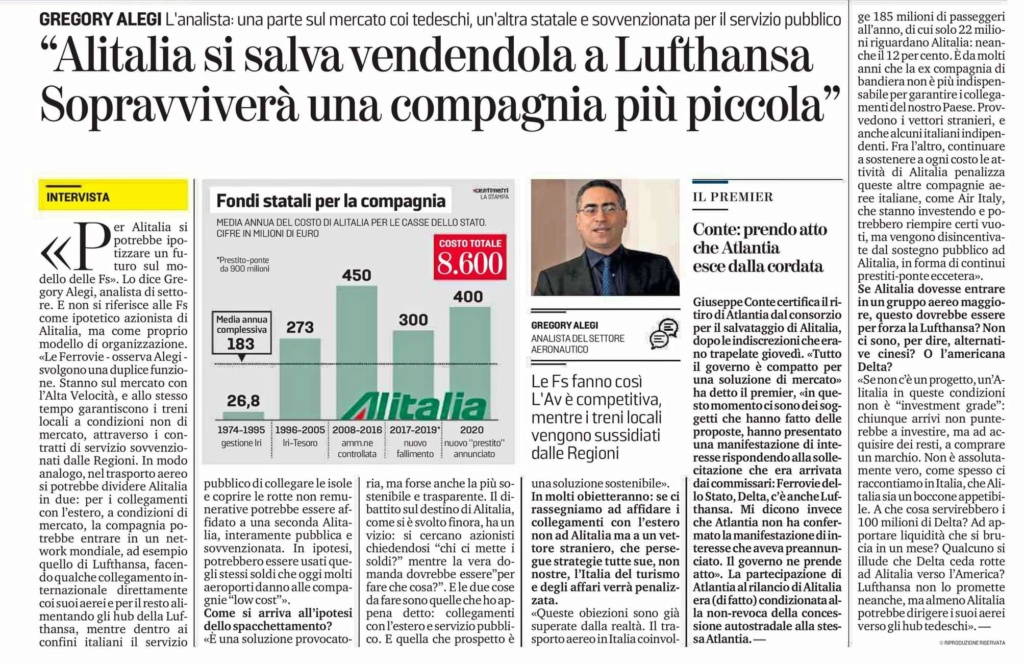 No new deadline extension is being considered for the submission of an investors’ rescue plan for bankrupt Alitalia, Italy’s economic development minister said.
The government is considering the next steps for the airline after progress on the rescue plan stalled, but does not expect to break up the airline, minister Stefano Patuanell said.
Meanwhile, the European Commission, which is already investigating whether a previous government loan constitutes state aid for the carrier, is in contact with Italian authorities about plans for new funding for Alitalia.
Alitalia filed for bankruptcy in May 2017 and two-and-a-half years later its future is still in doubt, with the latest obstacle to a relaunch coming Nov. 19 when infrastructure company Atlantia, one of the potential investors in a planned rescue consortium, said conditions to join the consortium had not yet been met.
The consortium, to be led by Italian railway company Ferrovie dello Stato and include Delta Air Lines, was scheduled to present a plan for Alitalia by Nov. 21, the latest in a string of deadlines that were repeatedly pushed back. A further extension of the deadline was not being considered, Patuanelli told a Nov. 26 senate hearing.
“There is no market solution for Alitalia as we hoped,” Patuanelli said in a Nov. 25 interview on Italian TV channel Rete 4, citing Atlantia’s position. “We are evaluating various possibilities. The breakup and selloff of separate assets is not among them.”
In parallel, the European Commission said it was in contact with Italian authorities over government plans for additional funding to keep the carrier afloat.
“The commission also takes note of the announcement by the Italian authorities to grant another loan to Alitalia,” a commission spokesperson said. “We are in close contact with the Italian authorities.”
Italian media have reported that the government is preparing to inject around €400 million to keep the airline flying as the debate over the next steps drags on.
The commission has been investigating the previous government bridge loan to Alitalia.
“The commission’s investigation to assess whether Italy's €900 million bridge loan to Alitalia constitutes state aid and whether it complies with EU state aid rules is ongoing and we cannot prejudge its timing or outcome. We are in regular contact with the Italian authorities in the context of our ongoing investigation,” the spokesperson said.
Atlantia, the motorways and airports operator, was set to join the consortium.
“At the present time the necessary conditions have not yet been met for Atlantia to take part in the final consortium for the presentation of a possible binding offer for Alitalia,” the company said Nov. 19.
“In any case, Atlantia remains available to continue the discussions to identify a business partner and to define a shared, solid and long-term business plan for the relaunch of Alitalia.”