7 June 2022 09:55
Share this article
The Airports Corporation of Vietnam (ACV) and SEA Milan Airports have signed a pact at Routes Asia 2022 to promote the development of air routes from Italy to Vietnam with a focus on Ho Chi Minh City (SGN).

The Sister Airport Agreement will see the two airport operators share their experiences and work together to encourage airlines to launch direct services between the countries.

There is currently no direct air link between Vietnam and Italy. An ACV representative told Routes that interest in such a service has grown following increased investment by Italian companies in Vietnam.

Vietnam is a focus market for SEA because of the rapid growth of both touristic and business segment. By signing today the SAA we put in place a strong cooperation with ACV sharing the common goal to establish the soonest a direct flight to Milan,” said Andrea Tucci, SEA VP of aviation business development.

Speaking at the opening ceremony of Routes Asia 2022, Director General of the Civil Aviation Authority of Vietnam (CAAV) Dinh Viet Thang said that Vietnam is open to the world and Routes Asia can show that Da Nang and Vietnam is a safe place. He hopes various international agencies and airlines can provide feedback and comment to CAAV and pledged that the authority will “do its best” to support routes reopening.

Da Nang received 8 million tourists in 2019, 3 million of whom were international visitors. The city is currently targeting 3.5 million visitors in 2022 and has shared the conservative estimate of attracting 3,000 international tourists. 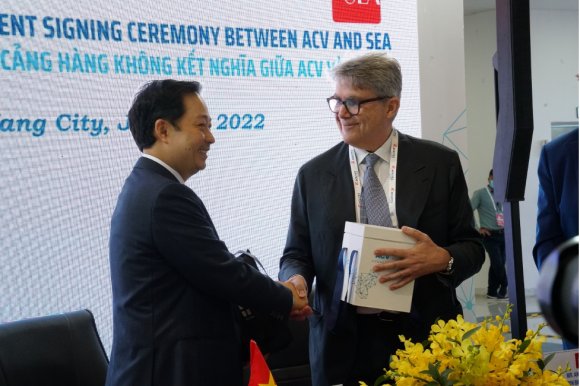