Boeing Statement on 737 MAX Certification and Return to Service

CHICAGO, May 16, 2019 – Boeing has completed development of the updated software for the 737 MAX, along with associated simulator testing and the company’s engineering test flight. To date, Boeing has flown the 737 MAX with updated MCAS software for more than 360 hours on 207 flights.

Boeing is now providing additional information to address Federal Aviation Administration (FAA) requests that include detail on how pilots interact with the airplane controls and displays in different flight scenarios. Once the requests are addressed, Boeing will work with the FAA to schedule its certification test flight and submit final certification documentation.

“With safety as our clear priority, we have completed all of the engineering test flights for the software update and are preparing for the final certification flight,” said Boeing Chairman, President and Chief Executive Officer Dennis Muilenburg. “We’re committed to providing the FAA and global regulators all the information they need, and to getting it right. We’re making clear and steady progress and are confident that the 737 MAX with updated MCAS software will be one of the safest airplanes ever to fly. The accidents have only intensified our commitment to our values, including safety, quality and integrity, because we know lives depend on what we do.”

In addition, Boeing has developed enhanced training and education materials that are now being reviewed with the FAA, global regulators, and airline customers to support return-to-service and longer-term operations. This includes a series of regional customer conferences being conducted around the world. 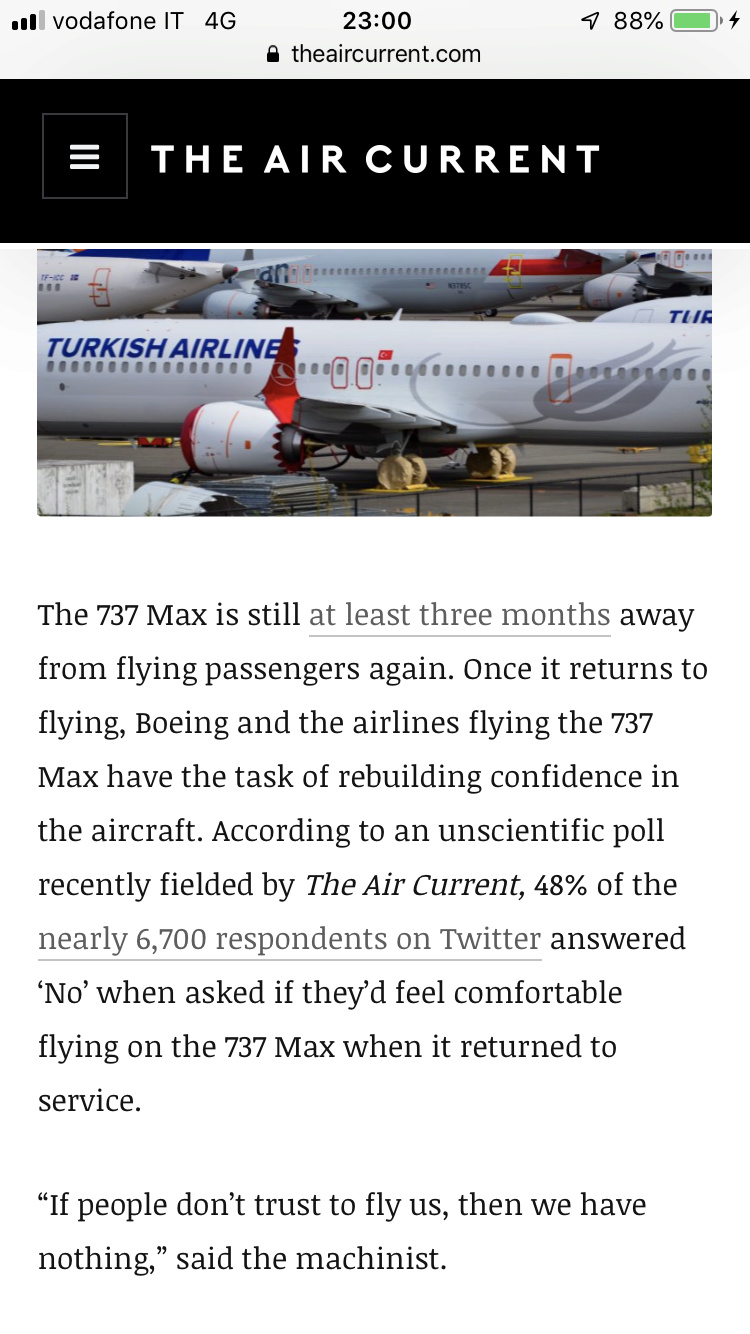 A lack of harmony in when global regulators lift the grounding on the Boeing 737 Max will further complicate the plans of international carriers to restore the troubled aircraft to revenue service, say airline chiefs during a lively panel debate at the IATA's World Air Transport Summit in Seoul today.

Carriers operating in large countries like the USA and Canada may operate the aircraft on domestic routes after their regulators allow the 737 Max to return to the skies, but Singapore Airlines doesn't have "the luxury", said the carrier's chief executive Goh Choon Phong.

"Everything I operate is international," he says. "Beyond having the approvals of authorities in Singapore, we would need approvals of other countries we operate to."

Singapore Airlines' subsidiary SilkAir has six 737 Max 8s on the ground. The carrier would require a "minimum viable set of countries" allowing the 737 Max to fly in order for the aircraft to return to service with SilkAir, says Goh.

Uncertainty remains over when the global grounding on the 737 Max will be lifted. The US Federal Aviation Administration, which was the last major regulator to ground the aircraft, has been criticised for not taking action earlier. Concerns continue to linger over whether the regulator allowed the 737 Max to be rushed through certification.

Lufthansa's chief executive Carsten Spohr indicates that while the FAA may allow the aircraft to return to service, other regulators might not so quickly follow suit.

"It would be difficult to explain to passengers that the aircraft is safe in some parts of the world but not safe elsewhere," he says.

The aftermath of the 737 Max grounding has upended long-held assumptions over the role played by the FAA in contributing to today's aviation safety track record, says JetBlue chief executive Robin Hayes.

"It's an issue bigger than the Max," he says. "People start to question the regulatory framework that has been largely successful in promoting a safer industry."


lines are increasingly concerned that the first deliveries of Boeing's new 777X will arrive late, representatives of both Emirates (EK, Dubai Int'l), the type's launch customer and biggest recipient, and Lufthansa (LH, Frankfurt Int'l), the biggest customer in Europe, have told the Wall Street Journal.

They are drawing up contingency measures to keep older aircraft in their fleets in case the new long-haul, twin-aisle aircraft type fails to show up on schedule.

Boeing could conduct its first 777X test flight in late June, sources close to the matter told Reuters on May 30. This would be too late for the Paris Air Show on June 17-23, where Boeing had previously hoped to make a high-profile marketing splash for the aircraft. But first deliveries are still on track for 2020, the sources said.
...

[...] an official of the Federal Aviation Administration said that the Boeing 737 MAX may not be back in the air before December 2019.

Ali Bahrami, the Associate Administrator for Aviation Safety at the FAA, told Bloomberg during the International Aviation Safety Conference in Cologne, Germany, that it was not possible to give a precise timeline as work to make the Boeing 737 MAX safe was still ongoing.

[...] operators from other parts of the world, they may have to wait even longer, as the main regulators (European Union Aviation Safety Agency, Transport Canada…) have announced their decision to conduct individual reviews of the Boeing 737 MAX update.